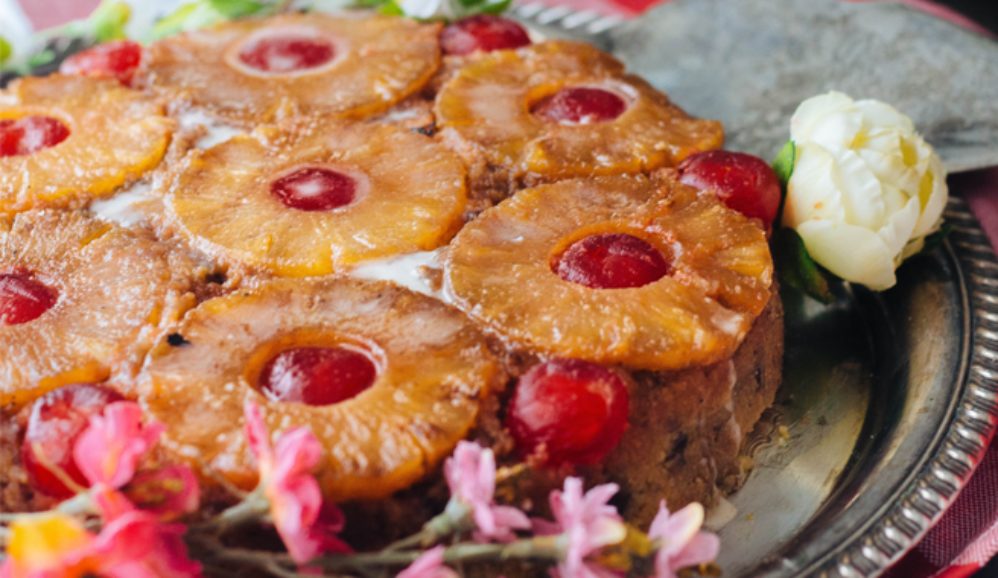 Don't miss out on dessert with this gluten-free recipe!

Preheat the oven to 350 degrees.

In a medium saucepan, stir the butter and brown sugar until melted.

Once the butter is melted, gently stir in the brandy, allowing the mixture to bubble a bit. Carefully pour the butter-sugar mixture into a 10-inch cake pan.

Arrange the pineapple slices in the pan before placing each Maraschino cherry in each pineapple round and on the sides. Set pan aside.

In a large mixing bowl, whisk together the flours, baking powder, cornmeal, and salt. Set aside.

In a stand mixer with a paddle attachment, cream the butter and sugar until fluffy.

Add in the egg yolks and vanilla and beat until well combined.

Add one third of the dry mixture, beating, then adding a third of the sour cream. Do this alternating until all the parts are incorporated. Fold in the toasted pecans.

In a stand mixer with a paddle attachment, beat the egg whites until soft peaks form, then add the remaining 2 tablespoons of sugar and whip this mixture until stiff peaks form.

Spread the batter evenly over the fruit and bake cakes for 45 to 50 minutes, until a toothpick inserted into the cake comes out clean.

Allow the cake to sit for a minute, then run a knife around the edge and invert a serving dish on top. Turn the skillet and serving the dish over, gently rap the bottom of the skillet. Allow cake to cool slightly on a wire rack before serving.

In a medium mixing bowl, whisk together the confectioners’ sugar, pineapple juice, milk, and vanilla until smooth glaze forms.

Drizzle over top of the cooling cake.