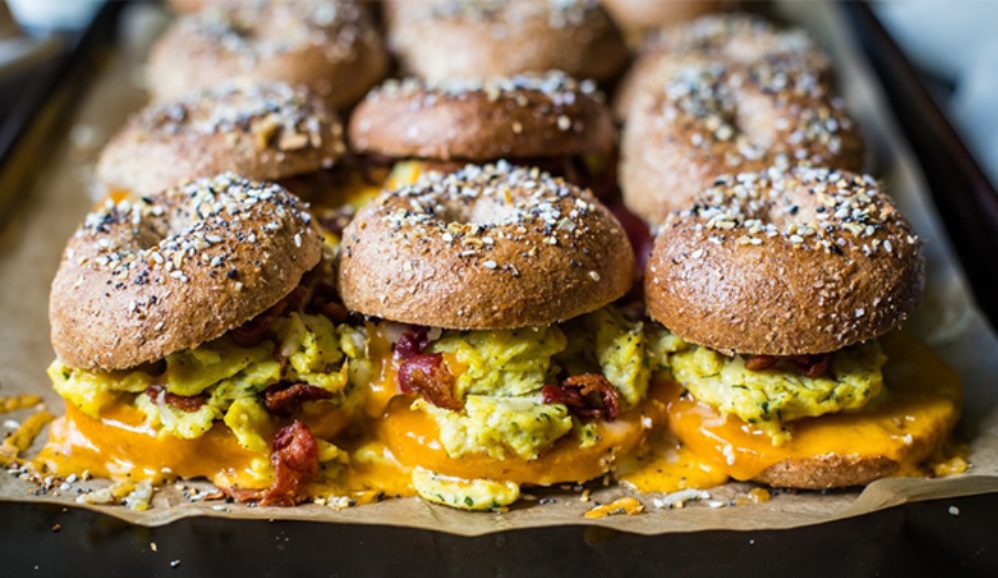 Recipe by: The Beach House Kitchen

To save time in the morning, you can cook your bacon the night before.

Line a large baking sheet with parchment paper. Set aside.

In a large nonstick skillet over medium-high heat, cook the chopped bacon until crisp. Remove from the skillet to a paper towel lined plate. Set aside.

Remove the all fat from the nonstick skillet. Wipe with a paper towel.

Crack the eggs into a large bowl and whisk until the whites and yolks are combined and frothy. Add the heavy cream, Dijon, salt, pepper, tarragon and chives. Whisk until well blended.

To the clean, nonstick skillet, add the two tablespoons butter and melt over medium heat. Once the butter has melted, turn the heat to low and add the egg mixture and cook, stirring occasionally. It will take about 8-10 minutes until you start to see some curds forming. Keep stirring until mixture is large creamy curds and softly set. Remove from heat.

Place the bottom half of the bagels on the prepared baking sheet. Top each bagel with a slice of the sharp cheddar cheese.

Brush the bagel tops with the two tablespoons melted butter. Sprinkle with everything seasoning, if desired.

Bake the sliders, uncovered, for 15-20 minutes or until heated though and cheese is totally melted. Remove from oven and serve.